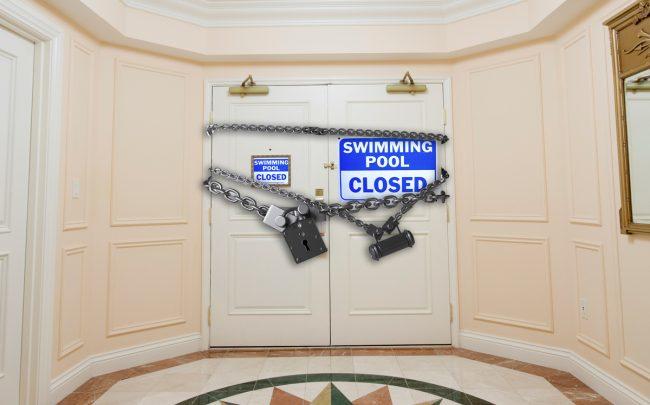 Pools are shutting down, along with playrooms, lounges and sleek co-working spaces that just a few days ago were among the most sought-after amenities at New York City luxury buildings.

Doormen are stopping delivery food workers before entering buildings, requesting they either sanitize their hands or leave the food at the door. Residents are giving each other side eye over recent travels and flu-like symptoms, while property managers mull the risks for workers to make in-unit repairs.

Welcome to high-rise living in the age of coronavirus.

The vast majority of New York City’s 8.6 million residents live in such buildings or other densely packed areas, adding a layer of complexity to attempts at social distancing and cleanliness.

In a letter to residents dated March 11, Glenwood Management announced the closure of common areas in its buildings based on a recommendation by the office of New York Gov. Andrew Cuomo. “We regret this inconvenience but feel it is our responsibility to protect your health and well-being to the greatest extent possible,” said the letter, a copy of which was shared with The Real Deal.

Glenwood is not alone.

The Durst Organization has instituted additional and “continuous” cleaning of all public touchpoints — elevator buttons, door handles and mail rooms — at its buildings, a spokesman said. A Related Companies spokesperson also said the company implemented “ongoing” cleaning in addition to an “end of day deep cleaning and disinfection of all common areas.”

At Zeckendorf Development’s condo tower at 520 Park Avenue,  all alterations and non-essential work will be shut down until further notice, building manager Brown Harris Stevens said in an email to residents Monday.

But as major employers including Google, Airbnb, JPMorgan Chase and Goldman Sachs tell their New York metro-area employees to work from home, some buildings are seeing even greater demand for amenities including board rooms and lounges. With more bodies around, anxiety over the transmission of coronavirus is up among building residents. And now, some may have to pitch in on upkeep as property managers consider thinning out the number of onsite staffers.

“Not everybody wants to be cooped up in their unit,” said Jeff Hendler, CEO of energy consumption software company Logical Buildings, whose clients include Rose Associates, Stonehenge, Dermot Companies, L+M Development Partners, AvalonBay Communities and Invesco. “For buildings that have good connectivity structures… you have happy residents and tenants.”

As the work-from-home population booms amid the global health crisis, there’s a lot more foot traffic and higher energy loads in residential buildings.

Broadly speaking, Hendler said he expects the energy footprint of residential buildings to change and the most immediate effect will likely be that “people are going to notice their energy bills are going up.”

Some technicians also stand to gain from troubleshooting working-at-home snafus, like too many people trying to stream or multiple teleconferences on one network.

“Now that people are spending more time at home and in their common areas,” he said, “they get to experience the weaknesses of their Wifi more.”

Within the buildings themselves, property managers are facing the task of fashioning procedures to address residents’ needs and protect building workers.

Holland & Knight, for instance, is advising its clients, condominium and cooperative boards, to shutter amenities if building managers learn that any resident has been exposed to coronavirus.

But Orsid Realty — which manages over 17,000 units predominantly in luxury condos and co-ops such as the Dakota — is shutting down amenities in some of its buildings due to a lack of available staff, according to Dennis DePaola, the firm’s director of compliance.

DePaola said Orsid has begun making copies of front door keys to hand out to residents in the event there’s no door staff, and engaging with private garbage carters, security and cleaning services in order to pick up work in case Orsid’s in-house staff aren’t available to come in. (Orsid’s executive and management team is now working remotely.)

Holland & Knight has also advised its condo and co-op board clients to warn residents that they may be called on to sort and distribute mail, bring their own garbage to the street, and sit at the concierge desk to permit access to the elevators if building staff were either barred from traveling in or ill. The law firm recommended to clients that if this were to occur all construction and visitors should stop.

“We hope it will not come to this, but we must be prepared,” the firm advised in its memo.

Orsid is also advising residents that its staff will be inquiring about their travel history and health history before moving forward with in-unit repairs, according to DePaola.

If residents are displaying symptoms, have been exposed to someone who is sick or have recently traveled to high-risk countries, they will hold off on the repair. But if the repair is urgent, Orsid staff will request that residents move into separate rooms or maintain a six-foot distance from them. Orsid is also supplying workers with masks, gloves and disinfectant, DePaola said.

“We have had very few cases in our buildings,” he said. As of March 12, DePaola said Orsid’s units under management had two cases of residents testing positive for COVID-19. But he expects the caseload to rise “exponentially.” New York City has 463 cases as of 11:30 a.m. on March 16, as recorded by the New York York State Department of Health.

A previous note to residents said the policy would be enforced in the Five Stuy Cafe, Stuy Fitness, appleseeds, Oval Studio and community center. The property manager is in the process of installing hand sanitizing dispensers throughout its portfolio, and has asked staffers exposed to COVID-19 to stay home. “As of today, staffing levels and subsequently, services have not been impacted by this request,” Vohs said.

READ MORE ABOUT HOW THE RESIDENTIAL BROKERAGE COMMUNITY IS ADDRESSING CORONAVIRUS

Danny Fishman, co-founder and CEO of Gaia Real Estate Development, said his company suspended programming by Finch Living, a Gaia subsidiary that runs events and classes in its properties, which include the Corinthian at 330 East 38th Street and 416 West 52nd Street. Since Friday, Gaia employees have been working from home.

“We bought equipment and software and tested it last week,” Fishman said. Before that, the company did a deep cleaning and provided hand sanitizer and wipes throughout the office.

“We don’t want to scare our residents,” said Jacky He, CEO of DMG Investments, which owns residential buildings and student housing in New York and New Jersey. “But we want to protect them.”

As more individuals test positive for coronavirus — New York state now has the most cases in the country — anxieties over contagion have increased.

Attorneys are advising condo and co-op boards that they need to balance informing residents about a case of coronavirus or exposure with individuals’ right to privacy and anti-discrimination laws.

Attorney Leni Morrison Cummins at Cozen O’Connor is advising her condo and co-op clients to send a notice to residents and building workers encouraging them to self-report illness, travel history or exposure.

Both Morrison Cummins and Holland & Knight partner Stuart Saft emphasized, in guidance sent to clients, that personally identifying information about someone’s health should not be shared.

Morrison Cummins said her firm prepared its guidance rapidly after she began fielding a number of questions including, in one alarming instance: “I heard so-and-so traveled to China, should we let them back in the building?”

She’s also recommending that boards update their communications plans to ensure buildings residents can immediately receive information and empower building staff to report to the board any resident or visitor they observe displaying flu-like symptoms.

Saft’s firm is advising clients to require any contractors, food delivery workers and regular staff to wash their hands or use hand sanitizer before entering the building, and discourage people from congregating in the lobby.

The Real Estate Board of New York’s broker counsel Neil Garfinkel noted in a Friday email to all members that policies requiring hand washing, or allowing building staff to ask residents about their health and travel history before entering their units, are legal so long as they are applied equally to everyone.

“Put such policies in writing so that they are clear,” wrote Garfinkel. “It is crucial not to be selective as to whom these policies are applied to.”

Though Morrison Cummins admitted that her first call on how to respond to coronavirus was from “a tony Upper East Side co-op,” she said concern among owners is widespread.

“I don’t think the paranoia of the virus discriminates based on sales price,” she added. “It’s coming from across the board.”